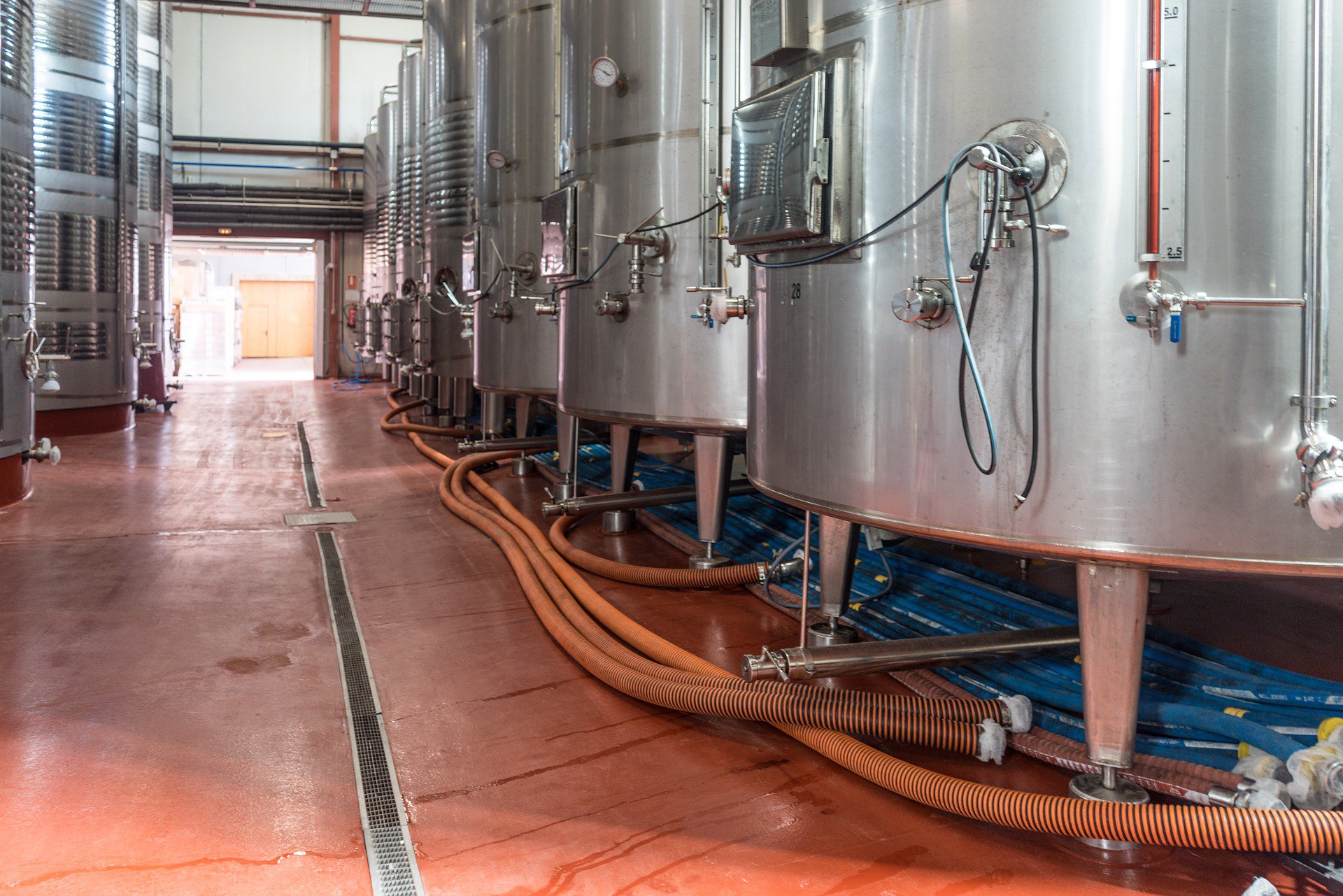 A Cold Liquor Tank (CLT) is essentially a large water storage tank. When used in a brewhouse, this tank is often one of the first stages in the brewing process. The tank will be filled with fresh groundwater or filtered water to be used in the next brew. CLT’s are equipped with either cooling glycol jackets or an external plate heat exchanger used for cooling water. Water is filled at ambient temperatures and typically cooled to between (36°F - 50°F) with typically averaging around 40°F. Once the water is cooled it is often referred to as cold liquor. 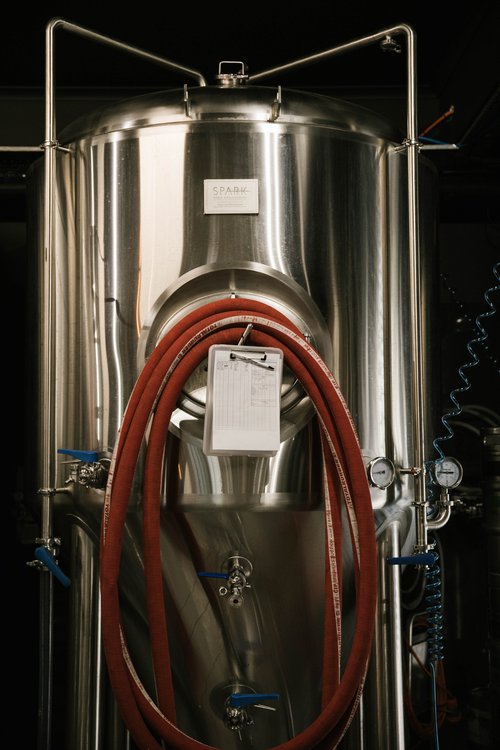 When a CLT is paired with a Hot Liquor Tank (HLT), the brewhouse will reduce water consumption and energy demand. Cold liquor will be used in the knockout to cool down the 212°F beer wort. A properly sized plate heat exchanger allows the cold liquor to efficiently chill beer wort to the desired knockout temperature. Water and energy savings are achieved when spent cold liquor is captured in the HLT. Thermaline PHE’s are designed to return cold liquor at 160°F or greater to the HLT. The spent cold liquor is now preheated and referred to as “hot liquor”. The hot liquor now requires minimal heating to be used in the next wort boil or can be used in brewery cleaning.

Proper sizing of a CLT will vary depending on the brewery’s operations and geographical location. Generally, a CLT will be at least 2x the brewhouse production volume or larger if processing multiple brews in a day. A cold liquor tanks required volume can be calculated based on equipment consumption. Typical sources of consumption would be the wort knockout PHE and whirlpool heat exchanger. This consumption can be calculated by knowing the flow rate of cold liquor required multiplied by the duration of knockout.

The plate heat exchanger is without question the most efficient heat exchanger option for knocking out beer wort. Plate heat exchangers use a series of corrugated metal plates to allow heat transfer between two fluids without letting them mix. Plate size, quantity, and pass arrangement are modified to optimally fit a unique process. In the case of wort knockout, the plate size, plate quantity, and pass arrangement will change based on the wort knockout flow rate, desired wort final temperature, cooling media temperature and flow rate. All the variables above will affect the efficiency of the heat exchanger and its ability to rapidly cool beer wort.

The heat transfer mechanisms involved in a PHE are complex but will follow the general principles in the following heat transfer equation: 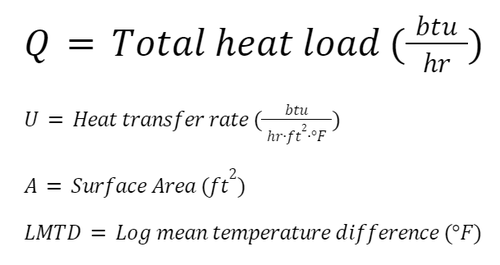 “U”,often called the U-value, is the rate of transfer. This is a function of the heat exchanger design and process. The U-value has many variables that impact its value and is difficult to manipulate through external process changes.

“LMTD” is a function with variables of the initial and final temperature of both the wort and cooling media. The LMTD can easily be manipulated by altering the hot/cold fluid temperatures and flow rates. Understanding these values is critical for engineering and designing efficient heat exchangers.

Typical brewery PHE’s come in either single or two-stage. A single stage PHE operates with only wort and a single cooling media. This media will be either cold liquor or city/well water. Two-stage heat exchangers will operate with wort and two cooling medias. Typical two-stage medias are city water and propylene glycol (Best practice is to use food safe glycol in a brewery or any food application in case of contamination or leaks). Utilizing city water to cool wort can be economical in some scenarios. This works well in locations where the city water is often below 60°F. Seasonal increases in water temperature can cause significant issues in wort knockout. High ground water temperatures can make the knockout unpredictable and can even make it impossible to reach the proper knockout temperature. A two-stage heat exchanger can help solve this issue by using glycol to finish cooling the wort to the final knockout temp. Wort cooling with glycol is highly efficient but can put a large Btu load into the glycol chilling system, often overloading the glycol chiller. A PHE using cold liquor for knockouts won’t suffer from seasonal temperatures or strain an existing glycol system.

Using cold liquor as the cooling media in a PHE provides numerous benefits. When compared with city water, 40°F cold liquor will provide a greater temperature difference between the hot and cold fluid. This reduces the required plate heat exchangers size and surface area. This saves money by using a smaller PHE for the same knockout when compared to city water. Cold liquor also provides a greater level of consistency in knockouts. The cooling media temperature and flow rate will be consistent for every knockout. This allows for brews to be planned and processed with a high degree of accuracy and precision. Furthermore, 40°F cold liquor will allow wort to be knocked out to cooler temperatures such as lagers from 50°F to 45°F. This knockout is unobtainable with most city water or requires a two-stage heat exchanger using glycol for the final cooling. Use of a CLT for knockout provides accurate and consistent knockouts while eliminating glycol dependency during wort knockout.

Glycol chillers are used in breweries to maintain temperature of tanks, generating cold water, assisting with wort knockout and various other cooling requirements. Using a two-stage PHE is efficient for reaching ale and lager temperature but comes with some drawbacks. A two section PHE requires additional plates and a center frame in order to use both glycol and city water in the knockout. This significantly increases the initial cost of the heat exchanger. Due to the high flow rate of wort during knockout, the heat being removed and sent to the glycol chiller quickly adds up. In some cases the heat load can be greater than the glycol chiller's peak rated capacity, causing the chiller to shut down. This can be avoided with careful planning when sizing the glycol chiller. However, the glycol chiller load can be reduced with use of cold liquor. The CLT can be chilled over multiple hours with each hour reducing the Btu/hr requirement of the chiller. For example, cooling a 10bbl CLT in 2 hours from 75°F to 40°F will require 45,114 Btu/hr. The same process over 4 hours will only require 22,557 Btu/hr. Extending the time to chill cold liquor will reduce the overall heat load sent to the chiller. This can allow the entire brewery to operate with a smaller existing chiller or reduce the overall size of a new chiller purchase.

The above tables show the effects of cooling media temperature and heat exchanger size required for a given knockout volume. Most notably is the cold liquor units require the smallest plate model or the lowest plate count. In the 3bbl sizings, the 40°F cold liquor unit requires the least number of plates at 25, and is the smallest model, a T4. Meanwhile, the 60°F city water unit requires 61 plates in the same T4 model. The initial cost of a PHE is directly proportional to the size and quantity of plates required for the process. When reviewing the 10bbl sizing’s, the cold liquor units are in a smaller T4 model while the city water units require a larger T8 model. This also increases the cost of the heat exchanger as the T8 plates are larger thus requiring more stainless steel to produce the plates and frame. In the above example, the 60°F city water T8 PHE with 71 plates costs nearly 37% more than the cold liquor T4 with 55 plates. These sizing’s demonstrate the real world effects of cooling media temperature and temperature approach (LMTD). As the temperature difference between the hot and cold fluid increases, the heat transfer efficiency correlates. This increase in temperature differential results in a significant decrease in the size of heat exchanger required for the wort knockout.

When seasonal water temperatures rise, some breweries look for ways to cool incoming water used in the wort knockout. Their goal is to cool the incoming water enough to maintain a proper wort knockout. This process is always less efficient than a cold liquor tank or two-stage PHE. Knockout PHE’s typically use a 1:1.3 ratio of wort to cooling media. This means 130% more water needs to be cooled compared to wort. The required Btu load would be reduced by using a secondary wort by glycol heat exchanger or using a cold liquor tank when seasonal water temperatures rise. Not only is this method inefficient in theory, but the design is also hard to implement correctly. Water precoolers chill high flow rates of water and require an even higher flow rate of glycol to operate properly. When a high glycol flow rate isn’t available the precooler size increases, resulting in a higher cost for the PHE. When facing high seasonal water temperatures, the most energy and cost efficient options will be to use a glycol by wort PHE or cold liquor as the cooling media.

Using cold liquor for wort knockout is an economical and energy efficient choice of cooling media. The use of cold liquor allows the option of using a smaller PHE when compared with using standard city water or two-stage PHE’s. Glycol chiller heat loads can be reduced by chilling the cold liquor tank over multiple hours when compared to a rapid knockout using a two-stage PHE. Wort knockout is as much a science as it is an art. There is no ideal method to run the brewhouse and knockout beer wort, however the proper use of a cold liquor tank should not be underestimated. The exceptionally consistent, simple and energy efficient knockouts allow time to be spent elsewhere in the brewhouse rather than working with inconsistent knockouts caused by unreliable cooling medias.

If you found this helpful, please be sure to subscribe to our newsletter and learn more about different processes, products and best practices in the world of heat exchangers! This includes updates on our news & events, blog posts, white papers and case studies that are published monthly.